The Gospel among the Albanians 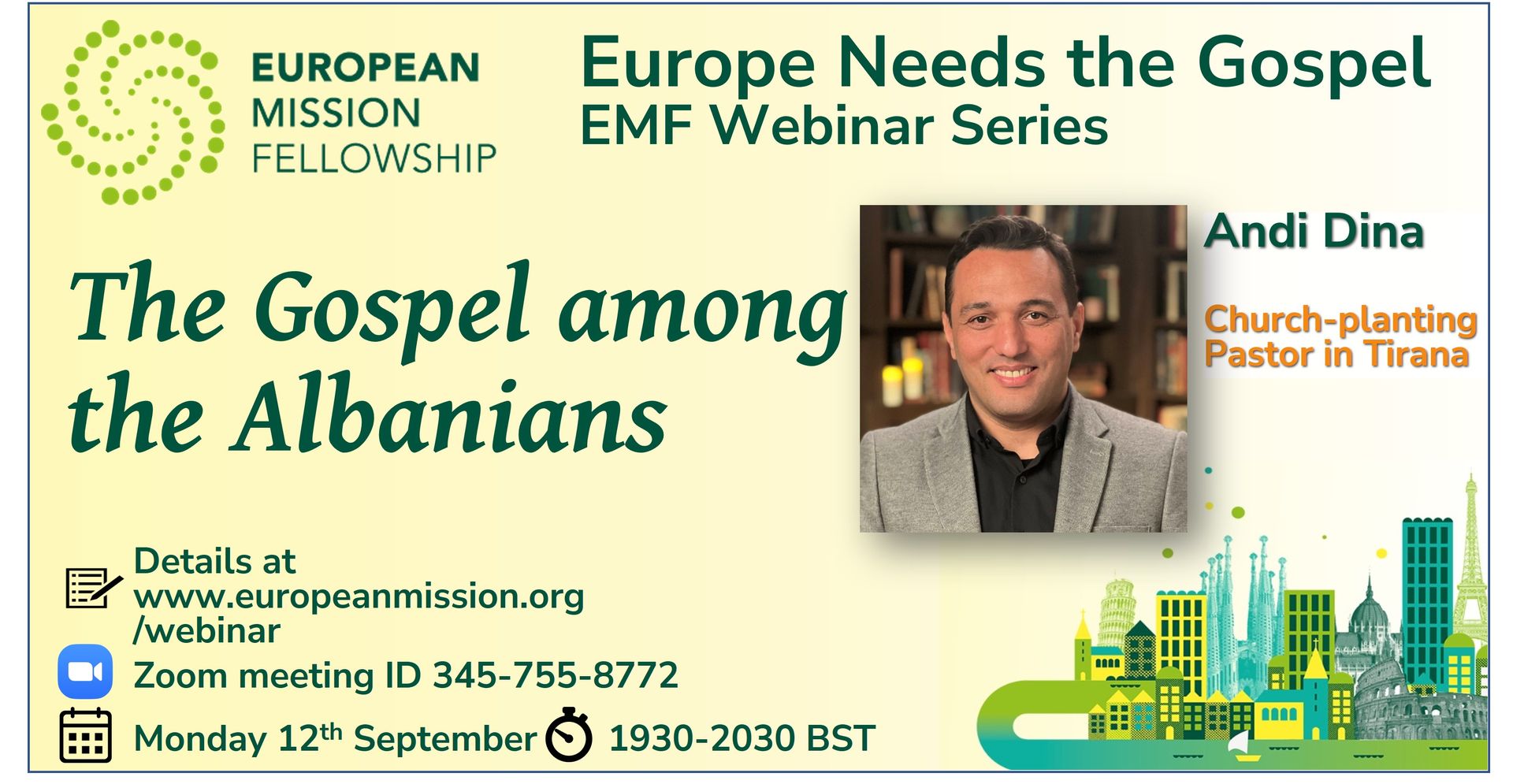 As part of EMF's 'Expanded Vision', we have been trying to highlight the great needs of the whole of Europe, but especially the needs of the countries of the Balkans and the Nordics, where only a tiny percentage of the population have a true understanding of the Gospel. In a webinar on 12th September Andi Dina, a church-planting pastor in Tirana, Albania, told us about the state of the Gospel among the Albanians, not just in the country itself, but also in the surrounding nations, in which there are significant Albanian communities. We asked Anwen Davies, a retired GP and member of Freeschool Court Evangelical Church in Bridgend, Wales, to tell us about what she learnt in this fascinating webinar. https://www.youtube.com/watch?v=VYoPYeL8zSM&t=1080s

“THERE IS NO GOD”. Written on a banner, this was the message that greeted passengers landing at Albania’s only airport during the years of communism. The communist government was one of the most repressive in eastern Europe, and in 1967 declared Albania to be the first atheistic state in the world. All religious activity was banned. There followed great persecution and suffering amongst God’s people. After communism fell in eastern Europe in 1989, Albania became open to the gospel.

Andi Dani, an Albanian pastor and member of the Gospel Coalition in Albania was interviewed and Paul Davies,director of Albanian Evangelical Mission, gave information and helpful insights on the current situation. Andi spoke first with Andrew Birch. He described his upbringing, initially under communism, although he was from a Muslim background. Both his parents were teachers, instructed by the government to teach that there is no God. After the communist years Andi attended university, where a friend told him of Christ and shared the Scriptures with him, leading to his conversion.

Andi told us about the history of the gospel in Albania. The first church was planted in 1892 after its pastor,educated in Bulgaria, returned to the country; he later founded the Albanian Evangelical Alliance. Communism was established after the country had been occupied in the Second World War. Such was the repression that it was estimated that just sixteen believers remained by the time communism fell. There are now thought to be 17,000, and there is a hunger for spiritual and theological growth amongst first generation Christians.

He then spoke about some of the positive changes in the country since communism: better economy, improvement in infrastructure, general stability. However, corruption is present and there is concern that many of the younger generation are emigrating. Yet the Lord is at work, and people are being saved.

He is now a pastor in Light Church Tirana, and is involved in children's and youth work, and church planting. In 2019 he founded IGNIS ministry, which seeks to support, encourage and provide sources for churches to spread the gospel. Three factors underlie this ministry -“sound theology, centrality of the gospel, a kingdom mindset.” He sees the biggest challenges as evangelism, discipling, equipping younger church leaders,and the sending of Albanian gospel workers to Albanian communities in nearby countries. Kosovo, north Macedonia, Montenegro, south Serbia, Greece and Italy have large Albanian populations that should be reached with the gospel. Kosovo and north Macedonia are particularly needy. Andi has yet to meet an Albanian evangelical Christian in north Macedonia.

A new church has been planted in the neighbourhood. Initially meeting in the home Andi shares with his wife Vilma and their four sons, they now have their own building. Amongst the church’s areas of work are children, the elderly and publishing of Christian literature. Andi and Vilma, together with a friend, are in a learning community studying theology at UNION college in the UK. Andi is keen that theological training should become available to other pastors in Albania. He also noted that there are many immigrants from Syria, India and Afghanistan coming to Albania for work - another mission field on their doorstep that needs to be reached with the gospel.

Finally, he was asked about the biggest current needs. He highlighted prayer as being first and foremost, followed by the requirements of smaller churches, and those of church planters and their families. Short, medium and long term mission workers would be welcome, as would a supply of Bibles, good literature and tracts.

“THERE IS NO GOD”, said the communist dictator, Enver Hoxha. Jesus said, “I will build my church and the gates of hell will not prevail against it.” Let us all pray to that end.