Casiodoro de Reina's translation of the Bible into Spanish 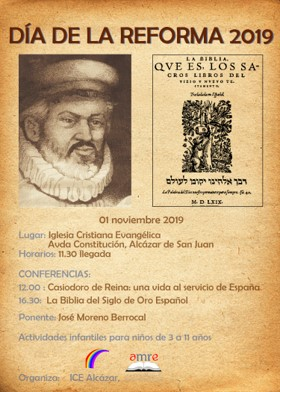 Casiodoro de Reina was a Spanish Reformer responsible for the translation of the entire Bible into Spanish. Reina was born in 1520 in Montemolín, in the province of Badajoz. He was,seemingly, of morisco ancestry, that is to say, he came from Christian converts with a Muslim background. Reina entered the Hieronymite order in the monastery of San Isidoro del Campo in Santiponce, near Seville. The order,following the example of their founder, Jerome, was particularly concerned withthe translation of Bible. Reina became acquainted with evangelical doctrines in the monastery. We can mention, at least three ways: First of all, through his own study of the Bible. Secondly, through the influence of other people who an appetite for the gospel and who have sown the seed of the Gospel in Seville:people like Rodrigo de Valer, Francisco de Vargas, Dr. Egidio (Juan Gil), Dr. Constantino de la Fuente, and the prior of the monastery, Master García-Arias,known as Maestro Blanco. Thirdly, through books coming to Seville from Geneva and from Germany with the exposition of the way of salvation that was shaping the Continent: by faith alone in Christ alone. The Inquisition became aware ofthe impact of evangelical teachings in the San Isidoro Monastery. But,  just before they were arrested by the authorities, Casiodoro together with other eleven monks, fled from Seville to Geneva. This was in 1557. For the rest of his life, the Inquisition tried to capture him. He was forced to move from one place to another. Casiodoro lived in London, where he married Anne, the daughter of a man called Abraham Leon of Nivelles, a christian convert from a Jewish background. In 1559, he served as pastor to the Spanish Protestant refugees there, meeting in a church building located in a street called St Mary Haxe. He also lived in Frankfurt, Heidelberg, Antwerp, Orleans, Bergerac, Montargis, Cologne, Strasbourg and Basel. It was in Basel where, in 1569, Casiodoro de Reina published his translation of the Bible. Regarding this translation, Reina’s main and best modern biographer, Arthur Gordon Kinder says:

Although Reina’s debt to other Spanish translations is undoubted, in the best humanist tradition he went back to the original Hebrew and Greek texts […]His achievement is all the more remarkable when one realizes that it has remained to the present day as basically the translation that is still in daily use by Spanish-speaking Protestants throughout the world, although it has been through several revisions since 1569.

Casiodoro was a pastor and an author. He held pastorates not only in London but also in Antwerp and Frankfurt. As an author, he published a Spanish Confession of Faith in 1561 for the Spanish-speaking congregation in London called the Confessio Hispánica. He also wrote a Commentary to the Gospel of John in Latin, which has just been translated into Spanish, and An Exposition of Matthew chapter four on The Temptations of Christ. Both of these works were published in 1573. He was present at the famous Colloquy of Poissy, a meeting of Catholics and Protestants in August 1561. He died in Frankfurt in 1594, a city that had granted him citizenship. After his death, his own son Mark went on to become the pastor of the evangelical church there.

Casiodoro de Reina’s Bible is known as La Biblia del Oso. This is because of the printer’s device on the title-page: a bear reaching out for honey from a bee’s nest hanging on a tree. On the ground, an open Bible displays the four Hebrew letters of God’s sacred name. The image has been identified as the printing device of Samuel Biener, or Apiarius (“the Bee-keeper”), a Swiss printer active in Basel. The bear seemingly refers to the heraldic animal of Biener’s native city, Bern, and the bees refer to his name. But a deeper meaning of the image is revealed by a quote from Psalm 119:103: “How sweet are your words onto my taste, sweeter than honey to my mouth” – an allegorical depiction of the thirst for God’s word. There is also this text from Isaiah 40.8: “the Word of our God stands forever”. For his translation, Reina used the oldest and most reliable texts available at that time.  Casiodoro also consulted both Francisco de Enzinas’ and Juan Perez de Pineda’s Spanish New Testaments. Casiodoro’s translation came off the press in 1569, forty-two years before the King James version appeared in England. Reina was able to publish his translation with the financial help of merchant Marcos Pérez and his wife Úrsula López de Villanueva. They were sefarditas, that is to say, Spanish people of Jewish ancestry expelled from their homeland because of their Jewish faith. They were both converted to the evangelical faith, embracing Calvinism. The text of the Biblia del Oso was slightly revised thirty-three years later by Cipriano de Valera and reprinted in Amsterdam in 1602. About that same year, Giovanni Diodati published his translation of the Bible into Italian.

Casiodoro de Reina's life is shows that the Spanish Reformers shared the same concerns that ruled supreme in the hearts of other European Protestant Reformers: that is, the paramount need to give the Word of God back to the people, to whom it justly belongs, but in a language they could understand.  As Casiodoro himself says in the “Admonition to the Reader” that precedes his translation:

The source of this divine light (Scriptures) is God Himself […] the mysteries of true religion want to be seen and understood by all, because they are light and truth; and because being ordained for the salvation of all, the first thing is that they may be understood ... At least this is beyond dispute,that God had given his Word to men, wishing to be understood by all, no good end can come then by forbidding the translation into any language”.

In order to achieve this, Reina was prepared to face all sorts of dangers and even death. His zeal is an example to as all today as we seek to bring the Gospel of Jesus Christ to our own people today. We are glad to go on doing God's work of spreading the Word of God in our own day and generation, as Casiodoro de Reina did for his own, using the wonderful translation he so ably put into our hands, la Biblia del Oso.