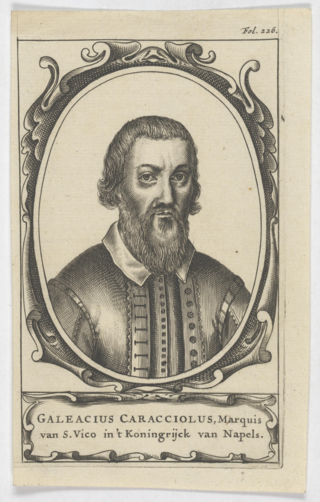 Vico del Gargano, the town where EMF missionary Antonio De Noia came to faith in Christ and where today he ministers to a small congregation of believers, was also the home of a famous Italian Reformer called Galeazzo Caracciolo. Antonio recounts the story.

Galeazzo Caracciolo was born in January 1517, the only son of Colantonio, Marquis of Vico, and of Giulia della Lagonessa. He died on 7 May 1586. Caracciolo was an Italian nobleman. Converted to the Reformed faith, he left Italy and settled in Geneva.

He was trained for the service of the Holy Roman Emperor, Charles V, whom he was introduced to at the age of fifteen in Brussels. Three years later he became the sovereign's spokesman and followed him in his winter campaign in Provence (1535-36). In 1537 he married Vittoria Carafa, daughter of the Duke of Nocera; it was a happy union from which six children were born, four boys and two girls, all of whom survived.

Caracciolo became acquainted with some disciples of Juan de Valdès belonging to the Spanish-Italian intellectual elite of Naples and, although he was a man of action rather than letters, he was soon attracted by their Reformed doctrine. Friends like Gian Francesco Alois and Marcantonio Flaminio spoke openly of his ‘vocation or conversion’ in the early 1540s. Several times he went to Germany, where he devoted himself to reading Luther's work and, in the spring of 1551, while travelling to Augusta, he suddenly fled to Geneva and to Calvin.

In his new homeland he carried out increasingly important activities and held positions of responsibility; at the same time he had a series of meetings with some members of his family, but with negative results.

In November 1551 he collaborated in the organisation of a church for Italians exiled for religious reasons by participating in the choice of the temporary pastor and, in the following spring after long efforts, he succeeded in having Don Celso Martinengo of Brescia elected as permanent pastor. On the death of the latter in 1557 he played an even more important role in the search for his successor which ended in 1561 with the hiring of Niccolò Balbani as pastor and himself as an elder. Galeazzo was also officially accepted by the Republic of Geneva, which initially considered him as a possible spy. In November 1555 he obtained ‘the Bourgeoisie of Geneva’ for free. Galeazzo was the first of the Italian religious refugees to obtain Genevan citizenship.

Contacts with the family in Italy, however, did not end; between 1551 and 1560 Caracciolo met four times with his relatives.

In the summer of 1555 in Mantua he had a meeting with his father who was the messenger of an offer from the Pontiff on the basis of which he would be allowed to live in Venetian territory. However, Caracciolo refused, pointing out to his father that the Pope's word could not be considered trustworthy when it concerned heretics, and his decision soon proved to be wise. In fact, Pope Paul IV, who was also Caracciolo's paternal uncle, in a speech in October 1557 stated with clear reference to Caracciolo, ‘our relative, the son of a daughter of our sister ... and he also has a niece of ours as a wife, went to Geneva to live with the sad ones, to lose his soul and body ... we do not talk about this matter, because, if our own father was a heretic, we would bring the bundles to burn him.

’Galeazzo tried on a number of occasions to re-unite with his wife, Donna Vittoria, but she refused to have him back unless he recanted his Reformed beliefs and returned to the Roman Catholic fold. Sadly, his wife Donna Vittoria, eventually abandoned him.

The role of Caracciolo in Italian history is remarkable: he was the only blood relative of the Pope and courtier of the emperor to become a Calvinist and to remain so. He was the only Italian noble to have definitively abandoned the Church of Rome. Caracciolo was for decades the animator and promoter of the activities of the Italian community of exiles and constituted the link between it and Calvin. He was highly esteemed by Calvin and mentioned in his dedications in his commentary on the first Epistle to the Corinthians in 1556, and of the Italian translation of Calvin's Institutions in 1558. In 1558 he was elected a member of the Consistory of Geneva and was continuously part of the highest organ of the Calvinist Church. Caracciolo's role consisted essentially in serving as a link between the Italian Church, of which he was an ‘elder’, and the French-speaking community.

Caracciolo married the widow Anna Framery, originally of Normandy, and together they lived quietly, and in simplicity, in a small house near the Cathedral in Geneva for the remainder of their days.