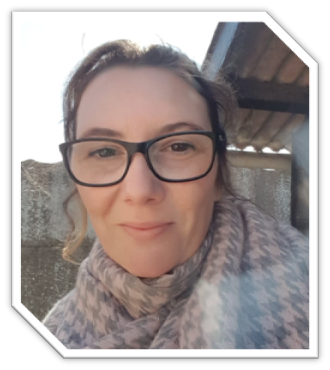 Rebecca Debruyne’s home must be a lively place! She and her husband Andy have six children, and there are two sets of twins amongst them. Rebecca prefers to say they have seven children. They lost a little girl in a miscarriage some years ago, and this experience was crucial in Rebecca’s spiritual life, though for years before that sad event she had been a nominal believer in the Evangelical Church in De Panne, Belgium. She tells us her story here…

My name is Rebecca Debruyne and I’m married to Andy Magherman. Belgium is my native country and I live in the peaceful little village of Lo-Reninge in the beautiful countryside near the Belgian coast. I am a mother of seven children, but one of them, a girl whom we call Sanne, passed away before birth about four years ago. As for the other six, I have two sets of twins and two other children. The oldest two (twins), Alexandre and Christian, are 16, then comes Arthur aged 10, then Aiden and Simon (twin boys aged seven), and finally our two-and-a-half-year-old lively daughter, Ruth. I work for a home-help company in Belgium and help elderly people who are unable to do their own housework. I’m thankful for this job.

My parents came to faith when I was six years old. They heard about the Lord Jesus from the preacher at Eben-Haëzer, the evangelical church in De Panne, so our family grew up in the church. I was sixteen years old when I returned from a youth camp and committed my life to Jesus. I found His invitation to receive salvation and eternal life one of the most impressive proposals which you could receive from the Creator. From my earliest days I’ve always been a bookworm with a thirst for knowledge of all religions, myths, and scientific theories. I noted that God is the source of our life, He is life, gives life, and invites us to choose life. This was missing in those other religions and world views. And so, I concluded that Jesus was the Only Way. However, I didn’t really understand then what it meant to follow Him. That realisation didn’t come until I was 33 when the Lord made it clear to me that the life which I had chosen to lead between the ages of 16 and 33 did not correspond to what He wanted from me. I was more inclined to follow the ways of the world than to follow Him. That was when the real process of change started, when I really started searching for Him, precisely what He taught, Who He is, and how He sees things.

Yet the real surrender to Him didn’t come until after a painful event. I’d already experienced a lot of trauma in my life which had left scars. And so, although I wanted to give my life to this God, I was like a female version of Jacob and always wanted to run on ahead instead of waiting for Him and following Him. After the loss of our daughter Sanne in the fourth month of the pregnancy, I got to know Him as a Lord Who not only brings comfort, but also holds onto you and never lets you go. You really can lean upon Him. Sanne had been the child for whom I had prayed that if the child growing in my womb were to be a daughter, I might receive her as a testimony to His goodness for His Name’s sake. I had a dream in which I did two pregnancy tests; one was positive, but shortly afterwards it was covered in blood, whilst the second one was also positive, but nothing else happened with that one. I didn’t understand it at all, and I didn’t realise that this was from the Lord, but I did have a strange feeling. In my heart I had a message that the child which was growing inside me would not be for me. I also remember saying to my husband before we set off to go to the gynaecologist for the third examination, ‘I don’t think we can keep this child.’ My husband thought my words were merely pregnancy nerves. However, when we arrived, we discovered that the child had died. Later that evening, I couldn’t sleep due to the disappointment and distress and I didn’t understand. This was the girl I’d longed for, so why had the pregnancy ended in a miscarriage? What was the Lord’s purpose in this? I poured out my heart to Him, saying that I couldn’t go on like this, I didn’t understand anything anymore. I really needed the Lord now.

I opened my Bible and the Lord led me to the book of Ruth. I read through the entire book that night and found encouragement in Ruth 4v14: ‘Blessed be the LORD, who has not left you this day without a close relative;…’ Suddenly, I understood. My daughter hadn’t really died, but she was in the hands of the Lord and I felt such a sense of peace come over me, something I’d been searching for over many years. I simply had to learn to commit everything to the Lord. Finally, I decided to do just that. Later that year, I happened to be present in lots of meetings where the book of Ruth was discussed at length. I thought my imagination was running away with me, but the Lord was making it clear to me that I would have a daughter called Ruth. When I did become pregnant again, I said immediately to my husband: ‘It’s a girl and we’re going to call her Ruth.’ My husband isn’t a Christian. He’s not opposed to my faith or the fact that I bring our children up in the faith, but I could see that he wasn’t keen on calling our daughter Ruth. I said to the Lord, ‘If you think she should be called Ruth, you’ll have to take care of it. My husband prefers another name and I can’t persuade him.’ The next day, my husband did agree that Ruth would be a suitable name for our daughter. This is my testimony of how I came to know the Lord and learnt to surrender everything to Him.

In our lives we face lots of difficulties and things which we don’t understand. Yet He is truly the Rock in Whom we trust. He moulds us through our tribulations to sanctify us and make us more like Him. As Christians, we have this hope through His grace and love that we can share everything with Him in good and bad times. And that is a tremendous privilege.

Following Jesus also means standing out from the world. That can sometimes give a sense of loneliness. In my case, for instance, my husband, whom I love, is not a believer. That gives me moments of sadness. Yet here, too, I learn to trust the Lord and commit things to Him.

I’ve been a member of our church in De Panne for 22 years. I help with the crèche and children’s work, and once a month on a Saturday we have a children’s club, which I do with heart and soul.

My favourite Bible text is the whole of Psalm 139. It is a prayer, a song of praise, an encouragement, and worship for the Lord Who formed us before we existed. Nothing which happens to us takes Him by surprise and He helps us on our way and moulds us every day. He is accessible and never rejects us. Great is His grace and faithfulness to those who seek Him earnestly. He knows us through and through like a real Heavenly Father.