“I wanted to follow my dreams”. An interview with Bruno Pires 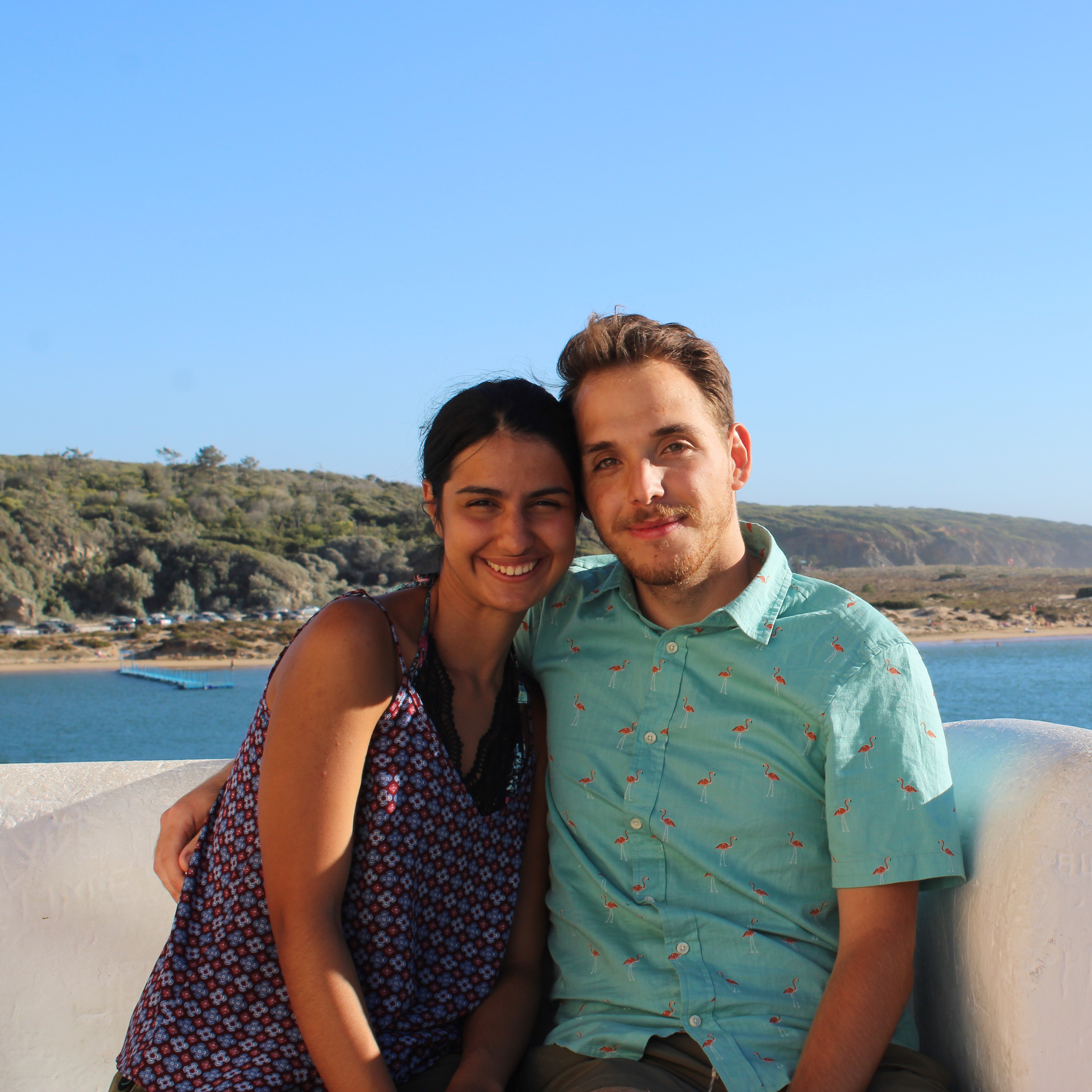 “I wanted to follow my dreams”. For some years Bruno Pires tried to push to the back of his mind the sense of calling to the ministry that came to him in 2015, the year he was baptised. Maybe a career in politics instead? That had always been his ambition, after all. But God had other plans, and today Bruno is studying at the Portuguese Bible Institute in Lisbon, where he is receiving a grant from the EMF Training Fund. https://www.europeanmission.org/train

Bruno, thanks for taking time to answer a few questions about yourself. It will help EMF supporters to get to know you better. First of all, tell us a little about yourself.

Well, I am 22, almost 23 years old (12th May), and I live in the beautiful country of Portugal in a town called Miratejo (Mira meaning view and Tejo meaning Tagus, the river that flows through Lisbon).

I am currently living with my mother and my grandmother.

For two years now, I’ve been in a relationship with my girlfriend Sara. We are both currently studying; she is studying medicine at Nova Medical school at Lisbon and I’m studying Theology at IBP,[1] also in Lisbon. Due to Covid the classes are all happening online for both of us, but are now slowly returning to normal.

In the little time I have available, meaning no papers to hand in, no reading to be done, I usually spend some time with Sara. Our studies occupy most of our time, so when we have the opportunity we like to be with each other.

I also enjoy drawing, playing some games, and reading. My favourite type of books is fantasy (Lord of the Rings is definitely my favourite). I recently started learning to play the guitar.

Everyone loves to hear a conversion story! What’s yours?
Some members of my family have a Christian background. My grandmother used to take me to church when I was young (when I was 6 years, maybe). The church she went to didn’t have Sunday school for children, so I had to sit with her and ‘listen’ to a grown-up say things I didn’t understand. I do remember clearly people getting up to sing and praying. Eventually I decided that it was more fun to stay home and watch television or play, so I stopped going.

A few years later, in 2009 the son of my grandmother’s sister invited me to go to a summer camp in Algarve. I didn’t want to go, but I ended up going and really enjoyed it. I met so many people and had fun; I remember clearly singing Hosanna by Hillsong; it was, and still is, my favourite song. As the week ended I didn’t want to come back home. Once I got home I remember telling my grandmother I learned how to pray.

After summer camp I got to go to a teens meeting in a local church, but for some reason I eventually stopped attending. But from that point onward I believed in God, I believed there was someone who created everything, me included and that I could ask him anything and that he would make it happen, like the genie from Aladdin; that was my belief system for a while.

I was invited to go to the summer camp again in 2011; I went, but it wasn’t the same, probably due to the age I was in.

I was again invited to go, this time in 2013. The camp was now in Lisbon. The theme was about genuine connection to others, where they talked about the topic of sexuality and relationships. That year I was in a serious and immoral relationship with a girl from my school. So the theme fitted like a glove. By the second day of camp I recognized I was a sinner and that I was deeply involved in sin. But there was hope. That day, the preacher introduced Jesus. The rest of the night was an internal conflict; I was confronted with the truth and was left with a choice to make. Leaders began to ask people to come to the front so they could pray for them.

I wanted to, but at the same time, I was resisting. ‘I don’t want to go, I don’t need to go, and I’m ok’ I remember thinking. Out of the sudden, I just lost control of my body, I went to the front, I didn’t understand how I got there, but I was there. That whole experience was the decisive element on my life that made me accept Jesus into my life; I felt his presence.

From that day on I started attending the church where I currently am. Got baptized in 2015. During that year I was convicted I had a calling to ministry.

Fast forward a few years. I finished school and didn’t know what to study in university. I wanted to follow my dreams. “God’s plan for my life can wait” I said to myself. I really liked politics and wanted to study politics, but I didn’t get into the university. I felt lost, so I decided to find a job until it became clear for me what I wanted to do. For three years I worked in a primary school with children. The second year that I was there, I remembered my calling. I started to pray about it, doors started opening and now I’m doing a 3-year course at PBI. I am in the leadership of the Youth Group, and I am a Deacon at Church too.

What is your favourite Bible book, and why?

It’s hard to pick one. I really like the book of Proverbs and the book of Ecclesiastes for their down to earth view of the world and their practicality. But I also have been enjoying the book of Acts of the Apostles. I am amazed by the way the church of the first century acted and their drive and ambition to spread the gospel. Me and Sara have been doing a devotional in Ezekiel and we are enjoying that too. I also read earlier this year 1 and 2 Samuel and enjoyed knowing more of the History of Israel and the contrasts between Saul and David.

How come you have a relationship with EMF? What does that consist of?

I got to know EMF through some people I know. Pastor José Rodrigues and Elisa studied there, as well as their son Samuel. Two good friends of mine also studied with EMF, João Rodrigues and Paulo Serafim. I also had the opportunity to go to the Huddle [2] in 2016 I believe, where I got to know people and the overall view and goal of EMF.

Once I manifested the interest to study, I spoke with Pastor José, and we approached EMF for a possible funding for my studies.

I hope I can be more involved with EMF and get to know more people through them.

What made you want to study at PBI?

‍It’s a situation similar to how I got to know EMF actually. Samuel Rodrigues studied there and became a teacher; Pastor José was also involved with PBI for a time. I got to know a few of the teachers and attend some of their events. I also read their objectives as an institution and their way of teaching the bible, which was what I was looking for.


What have you found most difficult in your studies?
Time management. I have to say I have got a Doctorate in procrastination (even though I don’t remember getting it). I mean it. I haven’t found someone that surpasses me.

On the serious side now, I last studied in 2017. I then began working in a public school with children from 3 to 10 years old; that is more often a practical job, in the sense that you have to do activities and keep them entertained, while equipping and building their life. When I went back to study I had no method, no discipline. So, the first semester was hard in this sense. I have now got the hang of it, although sometimes still have some lapses.

What plans do you and Sara have for the future, if the Lord so permits? Where do you see yourself serving?
Sara and I are students, I’m on my first year of a total of 3 years, Sara is on her third year of a total of 6 years. We are planning on getting married once we both finish our studies and start working, as that would bring us more financial stability.

We are both involved with leadership of the youth group. Our wish is that the church of Alto do Moinho would be the place where we would serve. But we are ready to follow God’s will for our life; if he wants us in Porto we would go there. If he wants in another country we would go, but so far, we see that the Lord is guiding us to ministry in Alto do Moinho.


Any message for EMF supporters reading this?

I want to thank you all for supporting me. I am studying to be more able to be involved in ministry, God willing. This was something I felt I was called to do. Without your support I wouldn’t be able to do this. It has been a blessing.

I have had the opportunity to know some of you already. I really look forward to meeting more of you and to seeing you soon as well. I am available to chat via Zoom or other video platforms. I thank God for the work EMF has been doing in Europe.

Thanks for sharing all this with us, Bruno. Many who follow the work of EMF have been praying for the Lord to raise up more workers for Portugal. It will encourage them so much to see those prayers being answered in how the Lord has called you.

2.       Please pray for Sara and Bruno as they plan their future life together.

3.       We can ask the Lord to help Bruno make the most of his time at the Portuguese Bible Institute, so he can serve the Portuguese church well when he finishes there.