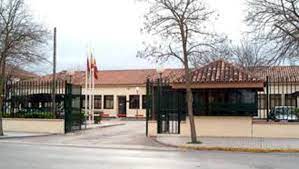 EMF missionary, José (Pepe) Moreno Berrocal pastors an evangelical church in the town of Alcázar de San Juan in central Spain. As part of his preaching and pastoral duties he has been ministering to prisoners in the local prison since 1999.

The prison in Alcázar de San Juan is a small prison but has inmates from all over Spain and even foreigners from other countries. The prisoners are from all kinds of backgrounds, José began his ministry to prisoners in 1999 when an inmate asked to see an evangelical pastor. José was approached by a relative asking for him to visit the prisoner. Initially, he was only allowed to speak to prisoners via a barred glass window, but eventually he was allowed into the prison to have one-to-one meetings, and group meetings with prisoners. Over the years this developed into having regular weekly worship services made up of prayer, hymn singing, Bible readings, and preaching. In addition, there have been opportunities to take prisoners, accompanied by prison guards, on outings, or to attend church services at Christmas, Easter, or on other occasions. There have even been baptismal services undertaken in the local lakes of prisoners that have been converted. These have been times of great blessing. Unfortunately, this is not possible in today’s environment.

The numbers attending will vary from year to year and even from month to month. There have been groups of up to twenty-five people attending services, whereas at other times there may be only one or two people. José has to constantly adapt his ministry to suit the situation current at any particular time. Things are very fluid, always changing.

José visits the prison once a week on a Wednesday from 5.30 to 6.30pm. He carries an ID card identifying him as an evangelical pastor, which gives him permission to enter the prison. On entering, he will walk around the compound so that the prisoners can see him and attend the service if they so wish. As well as spending time with prisoners, José will also take the opportunity to speak with the prison guards and has over the years developed a very good relationship with them and the prison authorities, including the prison directors. In fact, on one occasion the prison director at that time was invited to one of José ’s book launches and was very happy to attend. In this respect, José sees in his own ministry in the prison what Paul said in Phil. 1:13, ‘it has become evident to the whole palace guard…’

Due to issues related to insurance José undertakes this work on his own; he is unable to bring others with him from the church. Having said this, the church is very supportive of this work both in prayer and where needed financially, for instance to pay for the insurance fees. In all the years that José has been doing this work he can testify that he has known the Lord’s protection; he has never been in any difficulty at all, despite the fact that he is surrounded at times by some potentially very dangerous characters.

From March 2020 until July 2020 the work had to cease due to the Covid situation, but he is now visiting again. It is a difficult time especially with all the various Covid restrictions currently in place. José does his best to keep in contact with prisoners who have moved on to other prisons or have been released. He vividly recollects one young English man who served part of his sentence in the prison at Alcázar de San Juan. His mother may well have been a Christian and sent him an English Bible so that her son could join in the meetings with José and have some understanding. The young man has since moved on, and José is not aware as to whether he ever became a Christian; however, he is assured by the promise in the Bible found in Eccl. 11:1, ‘Cast your bread upon the waters, for you will find it after many days’. This verse is like a motto for José’s whole prison ministry. Only eternity will reveal the fruit of this work.

At the present time, there is a man who has completed his prison sentence, and who is now regularly attending José’s church in Alcázar de San Juan. This has been a great encouragement to José and the whole church.

The prison ministry has become an important part of the work of the church; even the local community recognise the value of this work. It has helped to strengthen links with the community and is a shining testimony and witness to the love of Christ. José is concerned to continue this work long into the future as it is a particular feature of the overall work of the church here in Alcázar.