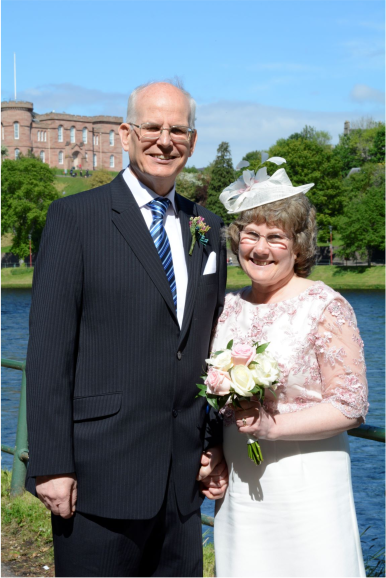 Anyone could have forgiven Michael and Mary Steedman for wanting to dedicate their married life to getting to know each other and to settling down into full-on leisure. Michael was in his retirement year (2014) when he wed this godly Scottish lady, and he had already for many years boldly and diligently used his strategic position teaching in Bologna University, and then in Forli, to invite his students to come along to “inductive” Bible studies. Would that evangelistic zeal die down in what some call “the golden years”? Read on to find out what has really happened, and what is still happening...

Michael Steedman has not lost any of his enthusiasm for wanting people to come to know the Lord. His zeal has rather been strengthened by Mary’s commitment to praying with her husband for the contacts he has made in Italy over the decades. Many of these people came to the discussion-style Bible studies Michael led week-by-week, in which students delved into John’s gospel, and in doing so heard the gospel message. This English teacher, tapping into skills he employed in the classroom, encouraged his students to ask themselves what the text was really saying; later on in each session, as a springboard for further discussion, the group listened together to a recording of one of the talks on John’s Gospel in simplified English which Michael had originally prepared for broadcast over the radio. Outreach that began with students from Bologna University continued, at a new branch of the university in the city of Forlì. Years and years of constant sowing.

Although Mary and Michael had come to the conclusion in 2019 that the dwindling numbers of individuals interested in taking part in studies meant that these could no longer continue in exactly the same format as before, the truth is that in this past lockdown year there have still been several folk doing studies individually, or as a married couple. Out of necessity these have been Covid-safe online sessions. (This area of Italy is in fact once more under severe Coronavirus restrictions). Decades after the first effort to reach Italians with the gospel, Michael can still talk to us about specific people ꟷ to respect the privacy of all involved, we mention only their initials in the prayer pointers below ꟷ who want to study the Bible with him and Mary.

Michael readily admits that it was not until Mary came along that he dared to offer much home-made food in his own house (although going out for an Italian pizza, as the study group used to do, does not sound like too tough an option!), so Mary has contributed an element of hospitality that has inevitably enhanced the atmosphere in the in-person studies and in contact with neighbours. Lockdowns snuff out that kind of social mixing, but the Steedmans pray on, and keep contact alive, and are as enthused about the smaller numbers right now as Michael must have been when those first 40 people put their names down for studies in Bologna back in the late seventies.

The couple is right to rejoice in what the Lord has done through the years; anyone who has worked in a Roman Catholic country in the latter half of the twentieth century knows that most conversions have been seen only after months or years of persistent seed-sowing; they are therefore conversion stories that deserve to be told. Stories such as that of Julia in the early Bologna groups, who little by little came to know that the Lord was speaking to her through the biblical text, until she one day told Michael “I think something has happened”, or Manuela’s story, which spans the gap between the early days of the Bologna groups and the present time. Converted back “at the beginning”, Manuela had backslidden, got married in the Roman Catholic Church and discovered some years later that she had cancer, from which she recovered. But fairly recently a recurrence of the disease brought her back to the Lord and she now displays a glowing, confident faith in Jesus that last summer led her to request baptism. (You can see Manuela’s baptism here)

An African friend of Michael’s once asked him why so few people had been converted through his evangelistic endeavour, perhaps not realising that Christian work in Europe is normally exactly like what the Steedmans have experienced. It requires decades of diligence and perseverance; for every encouragement there are often two discouragements; when you know how hard the soil is, you can only wonder at the Holy Spirit’s power in saving anyone at all. So it is a joy to see that Michael and Mary are still working hard to help their Italian friends find salvation in Christ. It is also a joy to witness what the Lord has done and is still doing through this ministry.