Mariola: 'The joy of knowing Christ my Saviour' 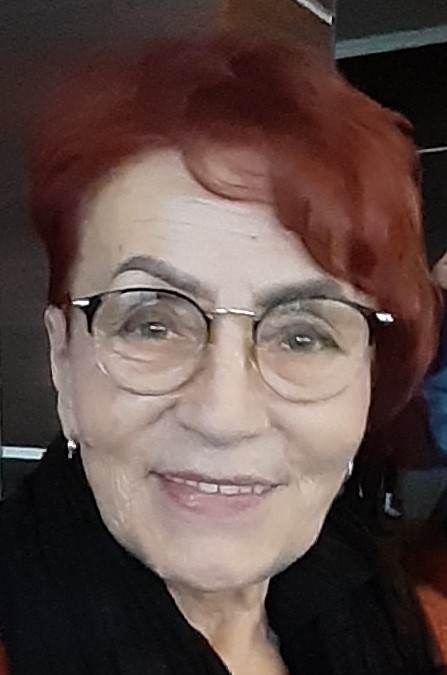 Krzysztof Rotkowski (Włocławek, central Poland)took Mariola's funeral service a few weeks ago. 'Sharing the Gospel with Mariola was of the reasons why we started a home Bible study group in Lipno and from that our church plant grew', he wrote. About the service, Krzysztof reports 'There were many people there and I focused on the reasons to be thankful to God based on 1 Peter 1:3-5, and that is God’s mercy, regeneration, living hope, the eternal inheritance, and God’s protection.' As you read Mariola's testimony, you will see that she herself lived in the light of all that truth, and died comforted by that truth. She left this written testimony with us before she died.

' It is my privilege to share with you my testimony of what the Lord Jesus Christ has done for me, a sinner. The love of God has reached me through my Saviour when I was deep in my sins and misery.

First of all, I would like to introduce myself. I was born to a family with very long and strong Roman Catholic traditions in which the worship of the Virgin Mary dominated. My grandmother was a donor to her parish and later on, she also started giving money to “Radio Mary” (a Roman Catholic radio station). She used to pay for masses to be offered for our dead ancestors, those who were unwell and other things. The time came when my mother joined her in these practices. Years that proceeded my mum’s passing away in 2014 had been filled with prayers to Mary, litanies, living rosaries, etc. The teaching of the Roman Catholic church gave me some idea of God as Creator of all things, Jesus Christ who died on the cross for our sins, of Heaven and Hell but also Purgatory. It informed me of what I need to do in order to be saved, about citing prayers from prayer books and litanies. These activities lacked my emotional involvement and became just necessary duties that had their own life but were outside my heart.

But as time passed even they ceased to be part of my life. I forgot all about God, church, and even committing myself to the hands of the Virgin Mary. I followed the flow of this world and life and it was so for a few decades. Only my illness, surgeries, family tragedies, and the death of people close to me would stop me for a while and made space to reflect upon my life. Thoughts of God would come as well but I did not know the way to Him. What is more likely I did not really search for it. In case of emergency, I still believed in the place of refuge called Purgatory. But my fear of death started to grow and was increasing as I was growing old.

My life became more balanced and quieter but I still was far away from God. Now all is different. God has moved my heart. He has chosen me and placed me on His way. I have committed my life to Him and resolved to belong wholly to Him. Through faith, I have received Christ as my Redeemer and Saviour and entrusted Him my mind, affections, and will. In prayer, I have asked the Lord to come into my life and be with me in struggles and joys, little and great. He has sealed me with the Holy Spirit for now I have become His child. I did not have a sudden, dramatic and dazzling experience of meeting Christ.

The process started in a hospital ward and lasted through the time when I was there. But it began to develop when I returned home and had conversations with Rose who had been my neighbour twenty years ago and now I stayed next door again. We have known each other for forty years. Also, the testimony of Zosia whose home we meet for Friday Bible study and who is my friend and sister in Christ now made a good contribution. Through their witness, my love for Christ was growing. I realized that Christ is the Son of God who died for my sins, was buried and brought to life again, and wants to enter my life to be my Saviour and Lord. It brought the relief I needed and longed for. As I mentioned my love for Christ sprouted when I was on a sickbed in a hospital facing serious disease and possible death which terrified me. Today I may say that God turned my disease into a blessing and used it to cause me to search for Christ.
‍

For you to understand me better I need to share my feelings of despair, fear, and helplessness that was eventually turned into the joy of knowing Christ, my Saviour. It was several dozen hours before my operation. I was enslaved by the fear of death, suffered great physical pain, a sense of impoverishment, loneliness, helplessness, and disappointment that life passed by so fast and may end soon. It all posed a question, ‘What will happen to me after I die?’ I realized the sins I had committed, guilt, and due condemnation. I understood that things which used to give me pleasure, joy, and moments of excitement were sinful and separated me from God. It horrified me and amplified my fear of life without peace with God. So I was crying out to Him to save me and grant me His grace and time to be prepared for the last judgment. When the time for the operation had come I prayed and was calm. I committed my sinful soul into His hands and relied on His mercy. After the surgery, I did not go back home due to some family problems but stayed in a flat which is next door to Rose’s. There and after twenty years I saw my neighbour again and our relationship was different because I was more mature and l had changed in the last few months. Still unwell, weak, perplexed I was trying to follow Jesus Christ. Reading the Word of God made me realize that I did not understand a lot of its content. Just at the right time Rose came to visit me and we started our conversations about past days and my illness and that gave her the opportunity to share with me about God, His Only Son, the salvation which is a free gift of His grace to be received through faith in the Lord Jesus Christ who came to this world to be our Redeemer and Saviour, spotless Lamb of God whose blood cleanses sins of the repenting men and women, the only way our sins may be forgiven.

Christ has died for my sins – this was the most precious truth. I became aware of the fact that the sacrifice of Christ was made also for my sins that they may be forgiven and I have eternal life. From now on we spoke with Rose about spiritual things and she was explaining to me things I did not understand in the Bible. Meanwhile, she invited me to Christian meetings that were going to be held at her home and led by Krzysztof.

He prepared Bible studies in such a way that would help me to know God better although I was the only one in a small group who was a novice. These meetings helped me greatly in my understanding of biblical truths.

As time passes, I have been granted an assurance of God’s love, His forgiveness, and my salvation. The Lord Jesus Christ has come into my life and His power has changed it. The more I know Him the more I love Him and want to please Him and be obedient to Him. And though the reality of physical death has not been removed triumph of being in the presence of the Living God.

To complete my testimony I want to say this: I desire to hold on to the Lord Jesus Christ with all my strength because He is the only way to justification, redemption, and reconciliation with God.

Church planting is hard work. It is also exciting, because any growth in gospel work is good news. It usually means believers are taking seriously the command to spread the wonderful message of hope in Jesus Christ. It means that more people who have never heard that message are given the chance to come into contact with true Christians, perhaps for the first time in their lives. Krzysztof Rutkowski and his wife Aneta head up a church plant project in the Polish town of Włocławek. You will be encouraged by their story.