‘Revival’- a great theme for a great conference in central Spain 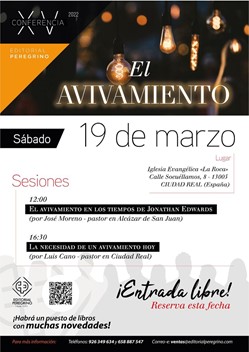 Some years ago, the Spanish Christian publishers ‘Editorial Peregrino’ decided to hold an annual conference, where speakers such as Mez McConnell, Andy McIntosh, David Barceló (Barcelona), and Leonardo de Chirico (Rome) were invited to deal with important issues ranging from Creationism, Roman Catholicism, Evangelism, to Systematic and Biblical Theology, to name but a few of the topics covered. The speakers have written books/other literature on their subjects, so the conference is an opportunity to buy those works, and even get them signed by the authors themselves. The event also affords the chance to renew fellowship with beloved friends.

The minutes before the 2022 conference of the Editorial Peregrino publishing house were filled with hugs, kisses, and ‘So glad to see you again! It’s been too long’.  It had indeed been too long, for two years ago the conference was cancelled due to Covid-19. Last year’s event was online. This year there was an oh-so-happy reunion of many who had always found this conference to be edifying, and who had kept the date as an untouchable appointment in their diary each year.

Three of EMF’s workers in central Spain took part in this year’s gathering: Matt Hill, who heads up the work of ‘Peregrino’, as the publishers are affectionately known (he led the organisation of the conference), Luis Cano, pastor of the Evangelical Church in the street called ‘Saint Teresa’ in Ciudad Real, and José (known to many as ‘Pepe’) Moreno, who pastors a congregation in the town of Alcázar de San Juan. A hundred and eight attendees sat down expectantly to what they knew would be a worthwhile time of ministry.

‘Revival’ was the theme for the day. José Moreno’s topic in the morning session was ‘Revival in the times of Jonathan Edwards’. Using his skills as a historian, Moreno, who has written a book on the 18th century preacher and theologian‒‘Jonathan Edwards: La Pasión por la Gloria de Dios  (‘Jonathan Edwards: Passion for the Glory of God’ )‒ took his listeners back to the times when ‘concerts of prayer’ were linked to times when the ‘Great Awakening’ occurred. He underlined the theological underpinnings of the desires Edwards and others had for that revival to occur. They longed for God to be glorified

Luis Cano, for his part, left his hearers in no doubt about his own desires for revival to happen in our times. Like the conference organisers, he is perplexed by the lax, comfortable Christianity we have come to believe is normal. The Zoom-rooms of Covid-19 have become a relaxing space some have continued to use, pointing to a cooled-off, conformist attitude to their faith on their part. Luis challenged the audience to raise the bar in their Christianity. To see how feeble their desires for God might be, and even when they know they are feeling ‘religious affections’, to never be content with what they have. They should long for more, for more, for more, striving with God, pleading with God to make them holier, more prayerful. It was, Matt Hill remarks, a ‘heartfelt’ plea to those listening, urging them to wake up and beg the Lord for mercy and for revival.

Those attending also got the opportunity to be challenged to use the evangelistic newspaper ‘El Heraldo del Pueblo’, as Raquel Farrugia (a.k.a.  EMF director Andrew Birch’s daughter-in-law!) interviewed the paper’s editor, Daniel Abad. The latter informed those sitting in the ‘La Roca’  (The Rock) church building in Ciudad Real (premises of the local Assemblies of God congregation, who allowed the event organisers to use their ample building), that producing a newspaper every three months requires discipline and effort. He encouraged the listeners to use this evangelistic tool in their day-to-day witness to friends and neighbours.

Matt Hill presented Editorial Peregrino’s projects to help believers (especially pastors) in Cuba. There were two literature stands that day; one sold ‘Peregrino’ titles and other good books and Bibles. The other sold damaged and second-hand books, with proceeds going to the funds used to subsidise printing and distribution of literature for Cuba. Matt’s PowerPoint presentation highlighted God’s faithfulness and provision for this ministry, where new books are being printed and where a crowd-funding project is pushing forward the publishing of more (some already exist in Spanish) of the ‘Welwyn Bible Commentaries’, which have proved their usefulness to so many over the decades.

An offering taken up during the proceedings has been given to the EMF appeal for Ukraine, but directed specifically towards the publishing and distribution of Bibles and good literature to those  whom our mission workers and their colleagues are helping as they flee danger in that country.

Editorial Peregrino was launched over 40 years ago. The Lord has been so faithful, and in these annual conferences, those who know and love this organisation’s work celebrate his goodness in providing good Christian literature in a land once so very bereft of it.

The conferences are available here.